Modern medicine has achieved amazing advances, yet many medical facilities struggle with an old issue: Enabling staff and doctors to communicate quickly and reliably and enabling patients to summon help. For medical professionals in clinics and hospitals, reliable, touch-free communication is essential. Controlled environments in detention and industrial facilities, where workers inside a sterile environment need to communicate with others outside that environment, often have similar needs.

Ordinary speaker phones and teleconferencing equipment can’t provide the coverage or clarity needed for these large areas, resulting in unclear and unintelligible communication. Most two-way open conversational communications systems suffer from latency and feedback. And systems are frequently patched together with components from multiple sources—a clumsy process that often yields unsatisfactory results.

Fortunately, all of these issues can be solved with Tech Works’ CI-Series Collaborative Intercom system, a complete, single-source intercom system in which all components are designed to work together. “The Tech Works Collaborative Intercom system is essentially like a kit; you don’t have to buy separate components,” explains Dusty Pray of A/V systems integrator Central California Electronics (CCI), which installs the systems in major hospitals and clinics, including state-of-the-art hybrid operating rooms. “It requires only moderate cabling; it costs no more than buying individual amps, speakers, mics, and so forth; and you get a flexible, integrated system.”

That Tech Works came up with this integrated solution should be no surprise. The company has been at the forefront of healthcare, detention, and industrial communications for more than 30 years, creating powerful, easy-to-use systems that help keep operations running smoothly and efficiently. Indeed, in addition to its use in medical procedure rooms, operating rooms, cath labs, and assorted observation and monitoring areas, the Collaborative Intercom system is a great solution for controlled environments such as industrial clean rooms and hazardous environments, as well as detention observation and interrogation rooms.

The Tech Works CI-Series system CCI installed in the Community Regional Medical Center’s hybrid operating room in Fresno, California, is an excellent example. The center boasts the only Level 1 hybrid operating room between San Francisco and Los Angeles but the room lacked a professional-quality intercom. The doctors complained about the lack of proper communications in the room—until CCI installed a Tech Works Collaborative Intercom system.

Pray’s CCI team specified wireless headsets, in addition to a procedural microphone. A single Tech Works CI-HSI-41 Headset Combiner enables up to four standard Plantronics CS-540 headsets to communicate with each other, as well as with other Tech Works CI-Series products. Two Combiners can be connected for up to an eight-headset system. Headset conversations can be broadcast over ceiling speakers and combined with a full-duplex, hands-free intercom. Doctors and staff experience a simple, easy-to-use system that fully meets their needs. 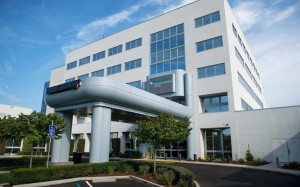 Consider, as well, the Radiation Therapy rooms at Memorial Medical Center (MMC) of Modesto, California, where the staff could not hear radiation therapy patients over the old intercom system. “The biggest issue was that the old system did not enable the microphone to be positioned close enough to the patient,” begins systems integrator Quality Sound vice president Marv Langford. “The issues were easily resolved with a Tech Works CI-Series Collaborative Intercom system.”

For MMC’s Radiation Therapy rooms, Langford chose a Tech Works CI-MSI-22 Microphone Speaker Interface, which enables a variety of audio intercommunications products to “talk” to each other over the Tech Works CI-BUSS. The CI-MSI-22 can be used in a small intercom when connected to a single CI-Series product or as an addition to larger networked systems employing a variety of devices. The system is networked using easy-to-install CAT6 Ethernet cable.

“Outside the room is a control desk, where we installed a Tech Works CI-ODC-1 Operator Desk Console, which includes a cardioid condenser gooseneck microphone and a speaker,” Langford recalls. “For speech intelligibility in that environment, you need the voice to be at least 5 to 8 dB above the noise floor, so we installed a Tech Works PRO-45 hanging cardioid condenser microphone, which can be easily positioned close to the patient, along with an eight-inch ceiling speaker. That made a big difference.”

In addition to the mic and speaker, the CI-ODC-1 sports buttons and indicators that allow the operator to just listen to the CI-BUSS communication or to talk and collaborate hands-free. A headset jack on the side of the console allows connection of a local operator headset. As with the CI-Series system in Fresno, the technology is sophisticated, but it’s very easy to use.

With a hanging microphone and a ceiling speaker in a large space, one might expect feedback to be an issue—but not with a CI-Series system. Tech Works employs an Automatic Level Control circuit that detects audio and instantly reduces the signal from that source’s paired monitor or speaker, eliminating feedback and producing a clearer, louder signal from the source.

Customers and systems integrators are convinced. “Memorial Medical Center’s team loves the way the CI system works,” Langford relates. “They liked it so much they had us come back to add background music for the rooms. We’ve installed the CI system in two rooms at MMC so far and will probably do more. They are super happy!”

Dusty Pray concurs that Tech Works’ Collaborative Intercom system is just what the doctors ordered. “Community Regional Medical Center’s doctors really like their CI system,” he confirms, “so they had us put a Tech Works CI-Series system in four other locations at the facility. Two years later, they’re still very happy with the system. Since we set up the hybrid OR system, we’ve set up CI systems at a sister hospital’s IR lab and CT lab. So far we’ve installed at least seven such systems, all of which have been very well received.” 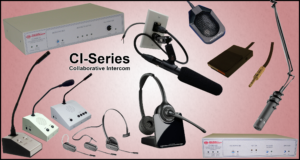 Looking for systems to replace the discontinued Rauland Borg DCC12 / DCC100, Dukane 9A1875, or Communications Company IC-28 / IC-29 systems you're using? Tech Works has replacement solutions just for you.

Looking for systems to replace the discontinued Rauland Borg DCC12 / DCC100, Dukane 9A1875, or Communications Company IC-28 / IC-29 systems you're using? Tech Works has replacement solutions just for you.
Engineered & Built in the USA